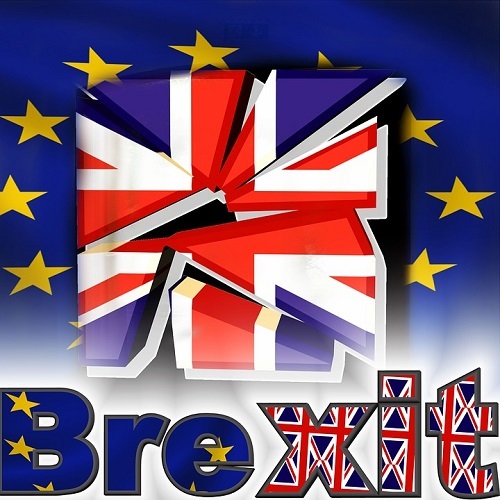 “It could be the darkest day in the history of European stock market.”

“Brexit”, the abbreviation of “British exit” that mirrors the term “Grexit”. “Grexit” was created when Greece tried to exit the European Union but failed at last. And now, the Britain makes it.

“In current phase, we are not able to realize the result (of Britain leaving the EU). But definitely, the uncertainty brought by the vote result is an enormous challenge.” The CEO of Deutsche Bank, John Cryan said.

Although from the earlier public opinion polls, the financial market held a positive attitude towards the referendum, the final result really touches off a huge earthquake among the global market.

“This result will absolutely be a huge blow towards the process of European Integration!” the Chancellor of Germany, Angela Dorothea Merkel said this afternoon.

The European stock markets nosedived at the opening, especially the bank board. In the opening today, the German stock market decreased almost 10%; the British fell by 9%; the French decreased 11%; the Spanish dived 17%. The Portugal Stock Index 20 fell by 9% and touched the lowest level since 1996. And the FTSE 300 even recorded the biggest day slide on record.

Also, as the final result was announced to public, the British Prime Minister, David William Donald Cameron, declared that he will resign his position in October. “I will do everything I can in future to help this great country succeed.”; “I think the country requires fresh leadership. I do not think I can be the captain to take the country to its next destination.”

8153km, this is the distance from London to Beijing as the cross flies. How would the final result of this referendum influence China? What are the reflections of the Chinese?

The Chinese Ministry of Foreign Affairs said that the Chinese government and the citizens would respect the choices of British citizens towards this referendum. “China has consistently developed its relations with the UK and the EU from a strategic height and a long-term respective” Hua Chunying, spokesperson of China’s Ministry of Foreign Affairs, said this afternoon.

“China supports Europe in choosing its own way of development.” she stated, emphasizing that a prosperous and stable Europe is in the interests of all sides.

“China hopes the UK and the EU could soon reach an agreement on Britain’s exit“, Hua added.

And from the social media platforms (mainly Weibo), the citizens hold mainly 2 different opinions towards the final result

– “The Brexit is an absolute bull for China, it’s a God-given opportunity.” Dan Bin, the CEO of the Shenzhen East Haven Investment Management Co. Ltd posted on Weibo showing  a POSITIVE ATTITUDE:

“1. The European Parliament will refuse to recognize China’s market economy status. If Britain exits the European Union, Britain will no longer need to observe the resolution decided by EU. It can flexibly recognize China’s status and expand the trades with China. This is fruitful for both China and Britain.

2. Once Britain exits the EU, the western countries such as U.s, Japan, Europe, especially the Europe will inject unparalleled liquidity into the market. They will extremely loose the currency to avoid any crisis.

In this comment, the publisher thinks that this is an opportunity for China to recuperate the domestic finance and expand the trades with Britain. He also says that this is a good thing to China, since the Europe always recognize China with prejudice due to France and Germany. A broken Europe will be benefit for China to seek for sally ports, in both politics and finance.

– But also, there are other voices that, once again, even being positive, are also MORE RATIONAL. From the comment of Ifeng news, there are 6 main effects towards China:

“1. The students studying in Britain can save tens of thousands of dollars
If UK exits the EU, the exchange rate of Pound will crash. Thus, for people to study or travel in UK, it would be a bull. Citigroup estimates, if the British exits the European Union, the exchange rate between Pounds and U.S. dollar will fall by 10% to 20%. For the UK students, the one-year tuition would be 1.5 million pounds and living expenses would be 10000 pounds. Thus, they may save 2.4- 4.8 million yuan per year.

2. The devaluation pressure of China Yuan increases
If UK exits the EU, the exchange rate of Pound will crash. Although, for people to study or travel in UK, it would be a bull, for the short term foreign exchange market, the depreciation of sterling will lead to the appreciation of the dollar, and will cause the devaluation of the China Yuan towards the US dollar.
Economists said Britain’s leaving could make the financial market panic, leading to the capital outflows in mainland China, increasing the devaluation pressure, and challenging the monetary policy management of the central bank.

3.  Yuan’s internationalization step will be disrupted
London has become the second largest offshore settlement center of China Yuan after Hong Kong. However, once the UK exits the European Union, the currency bonus will disappear. And the costs of strategy promotion in EU by Britain will also increase significantly. Chinese financial institutions need to consider dispersions to Paris, Frankfurt, Luxembourg and other places. This action will cost price.

4. Sino-EU trade cooperation will face a change
Some analysts believe that the economic impact of the British leaving EU may affect China ‘s exports, especially once the EU tend to adopt trade protectionist policies. Then, it will affect bilateral trade.
Once the UK exits the European Union successfully, the process to strengthen the strategic cooperation plans with the EU by the British will become difficult. The left is tantamount to breaking the invisible indirect cooperative ties between China and the EU, so that China had to choose other ways to press on with cooperation, and the impact from the various pre-bidding trade policies is also likely to be greatly reduced and become huge sunk costs .

5. No more ” the channel into Europe ” for Chinese enterprises
China has 500 million potential customers in the European market, however, due to protectionism, Chinese enterprises are often turned away. Britain is regarded as the most active countries within the EU which advocates free trade and investment liberalization. Thus, many Chinese companies will select the British as their production bases in Europe. And London will be recognized as a ” passage to Europe”. If Britain left the EU, may arise between the EU, the potential trade barriers between Britain and Europe will reduce the willingness of these enterprises to produce in UK. Some companies may choose to move to Brussels or Dublin, which are the areas have convenient and free market within the European Union.

6.  Chinese people will be on the window period for overseas house purchasing
In recent months, international investors’ enthusiasm for commercial real estate investments in UK decreased significantly, while the sentiment increased. Some industry insiders predicted that once the United Kingdom exits the EU, the house prices in UK will fall down. When coupled with the depreciation of sterling, it will further promote the real estate market volatility, which would be an excellent “window period” for Chinese investors. Some industry insiders said that since the supply and demand relationship is still the main determinant of UK property currently, the UK house prices are still optimistic within the next five years and expected to increase about 25%. This would be more profitable for investors focusing on long-term profit.”

Although the SSE (Shanghai Stock Exchange) composite index fell by 1% when closed, the Chinese citizens and market now are still having a positive attitude towards this result. As per the Chinese, as what we mentioned before, they respect the choices of the British, and also their democratic rights, or at least that is what we could see on the digital walled garden build within China.